Flowers have been associated with mankind since ancient times.  The earliest evidence of flowers and rituals was found in a grave, over 13,000 years old, in Israel.  Aromatic plants and flowers lined the grave in which two skeletons were found.  Earlier controversial evidence of pollen found in Neanderthal graves is still being debated on whether it was deliberately placed there by humans or naturally by rodents.  Romans used thousands of rose petals in their famous orgies and the flower of love was ironically used as warring symbols between the houses of York (rosa alba) and Lancaster (rosa gallica officinalis) during the War of the Roses. The Tudor rose symbol combined the red and white (perhaps rosa mundi?) to symbolize peace even though Henry VIII had a penchant for doing away with his wives and warred almost constantly.  The Victorians brought the language of flowers to a height by using them to send secret messages to their lovers.

Today we still send flowers as messages of love and condolence and occasionally dead ones as revenge in divorce cases!  The busiest day of course is Valentines where the rose reigns as the Queen of flowers for love.  Now we send what we like or what our loved ones want but the colours used to hold specific meanings to the Victorians as they tried to convey messages of ardour to their intended under the strict courting rules of the day.

Red of course meant and still means passion and passionate love.  Pink meant a softer more pure love, in case one frightened the object of his affection by the stronger red.

Yellow meant friendship and sometimes jealousy when symbolized by a yellow daffodil.  Yellow and orange now mean joy and marigolds are a popular flower in Indian weddings.

White of course meant innocence but also secrecy.  A white gardenia was a symbol of secret love. Now white is more associated with sophistication and monochromatic white gardens are considered to be the epitome of refinement and good taste.

Blue was and still is the colour of remembrance and longevity and symbolized by the ever loved and of course Victorian named forget-me-nots.

So when you choose your bouquet this Valentines, consider putting together a little message with flowers for your loved one to decipher. 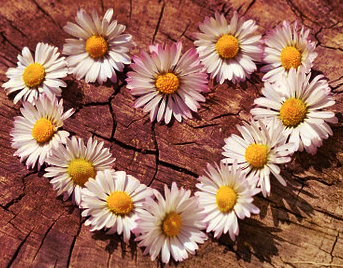